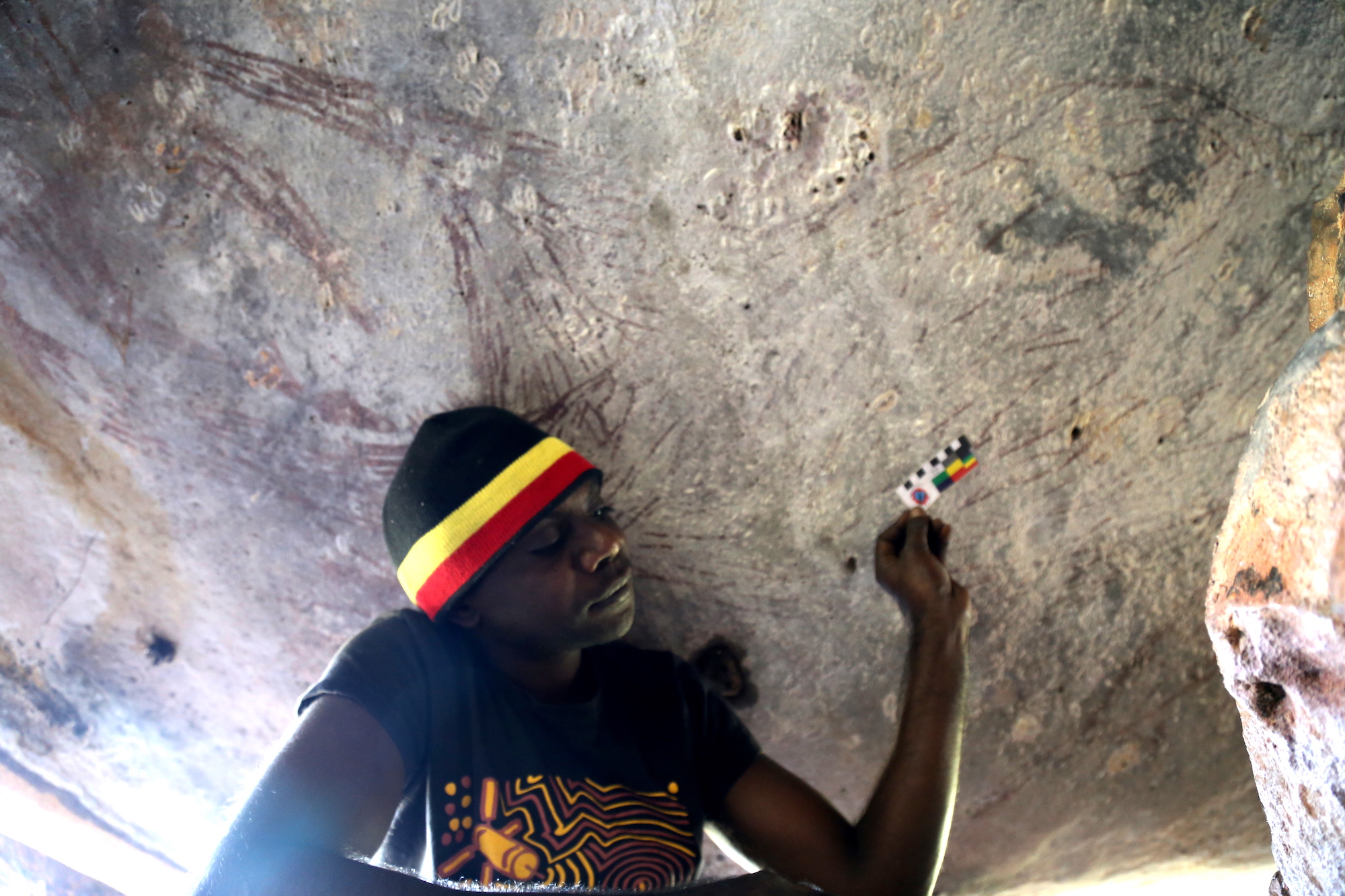 Researchers from the Rock Art Dating and Kimberley Visions project together with Balanggarra Traditional Owners have successfully dated a 17,300 year old kangaroo painting in the Kimberley.

Traditional Owner Ian Waina with the kangaroo painting that was dated between 17,500 and 17,100 years old. Photo: Peter Veth and the Balanggarra Aboriginal Corporation,

The rock art painting is on the Unghango clan estate in Balanggarra Country in the north-east Kimberley. The kangaroo motif is painted in the style of the older rock art paintings in the Kimberley with long irregular brush strokes. The 2 metre naturalistic looking roo is painted on the surface of a collapsed rock shelter ceiling. The roo was painted in ochre used from iron oxide in a red mulberry colour. There is no scientific dating method to date when the paint was applied to the rock surface but the fossilised mud wasp nests built over and under the painting can be dated.

“The dating of this oldest known painting in an Australian rock shelter holds a great deal of significance for Aboriginal people and Australians and is an important part of Australia’s history,” said Cissy Gore-Birch, Chair of the Balanggarra Aboriginal Corporation. 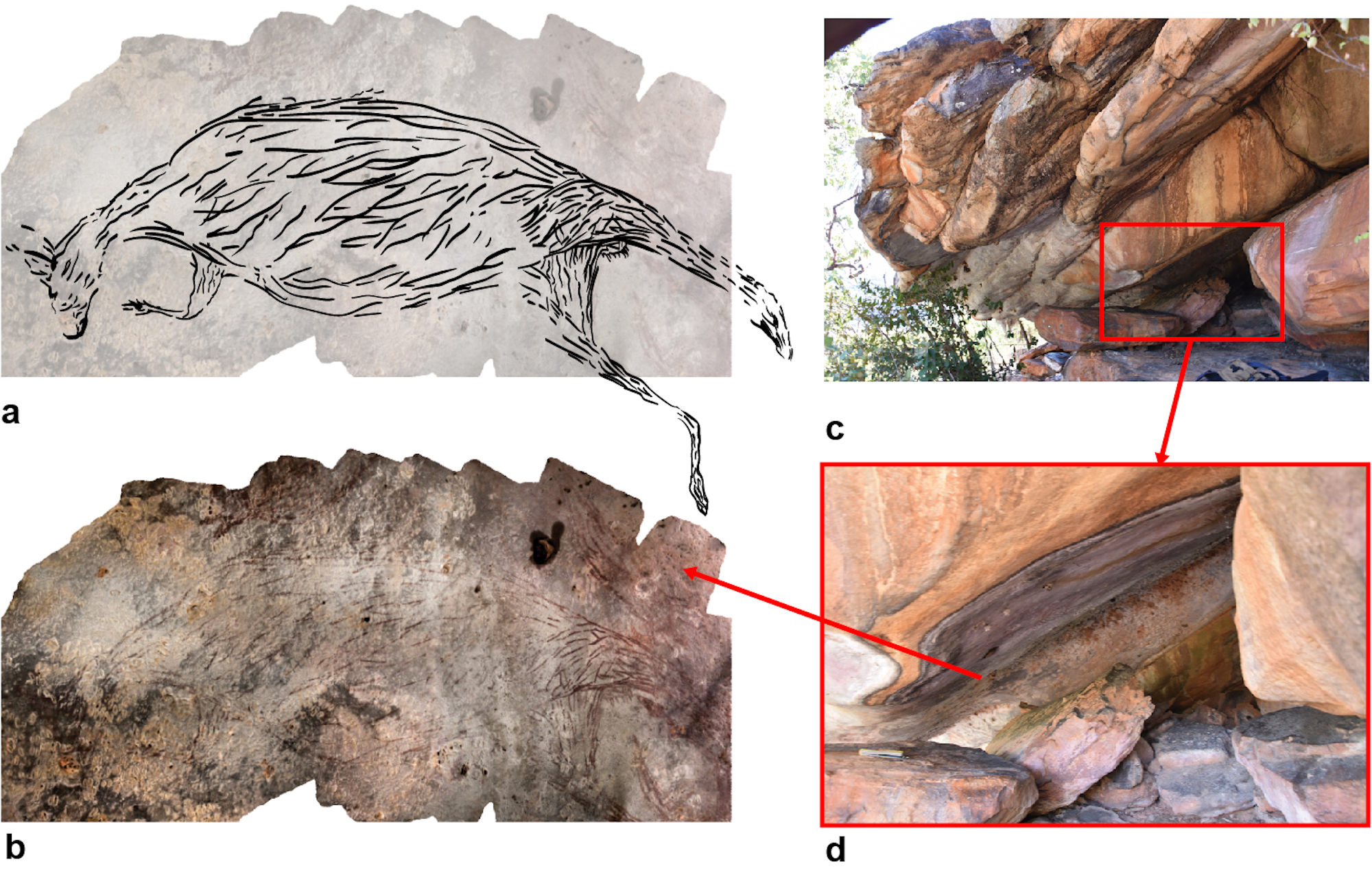 It is rare to find a rock art painting with mud wasp nests under and over the pigment of a single painting. The kangaroo painting that is in a well-protected rock shelter had three nest underlying the painting and three nests built on top of the painting that were dated. These ages of the nests determine the painting is between 17,500 and 17,100 years old; most likely 17,300 years old. These dates help to reconstruct the environment in which these artists lived around 600 generations ago.

The painting of this Kangaroo coincided with the Last Ice Age, cooler and drier than it is today. The sea levels were lower, 106 metres below today’s Kimberley coastline. As the climate warmed, rainfall increased and the sea levels rose, Last year the team dated and published the dates for Gwion figures that were painted 12,000 years ago. The sea levels had risen to 55 metres below those of today,

Future research will undoubtedly locate older paintings but this 17,300-year-old painting of a kangaroo in the Kimberley is the oldest know intact painting in Australia. 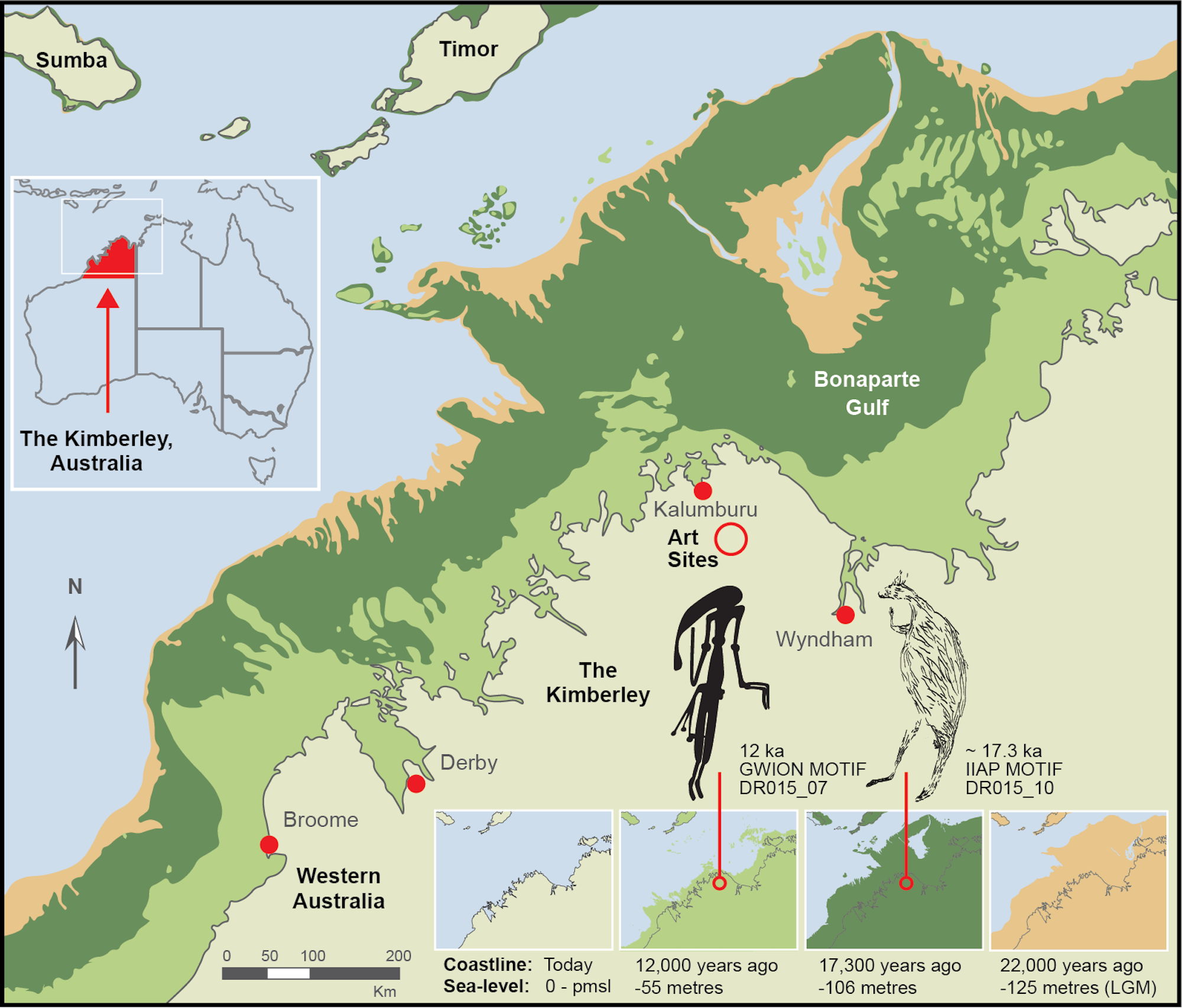 Map of the Kimberley region in Western Australia showing the coastline at three times: today, 12,000 years ago (the Gwion period) and 17,300 years ago (the earlier end of the known Naturalistic period). Illustration: Pauline Heaney, Damien Finch. 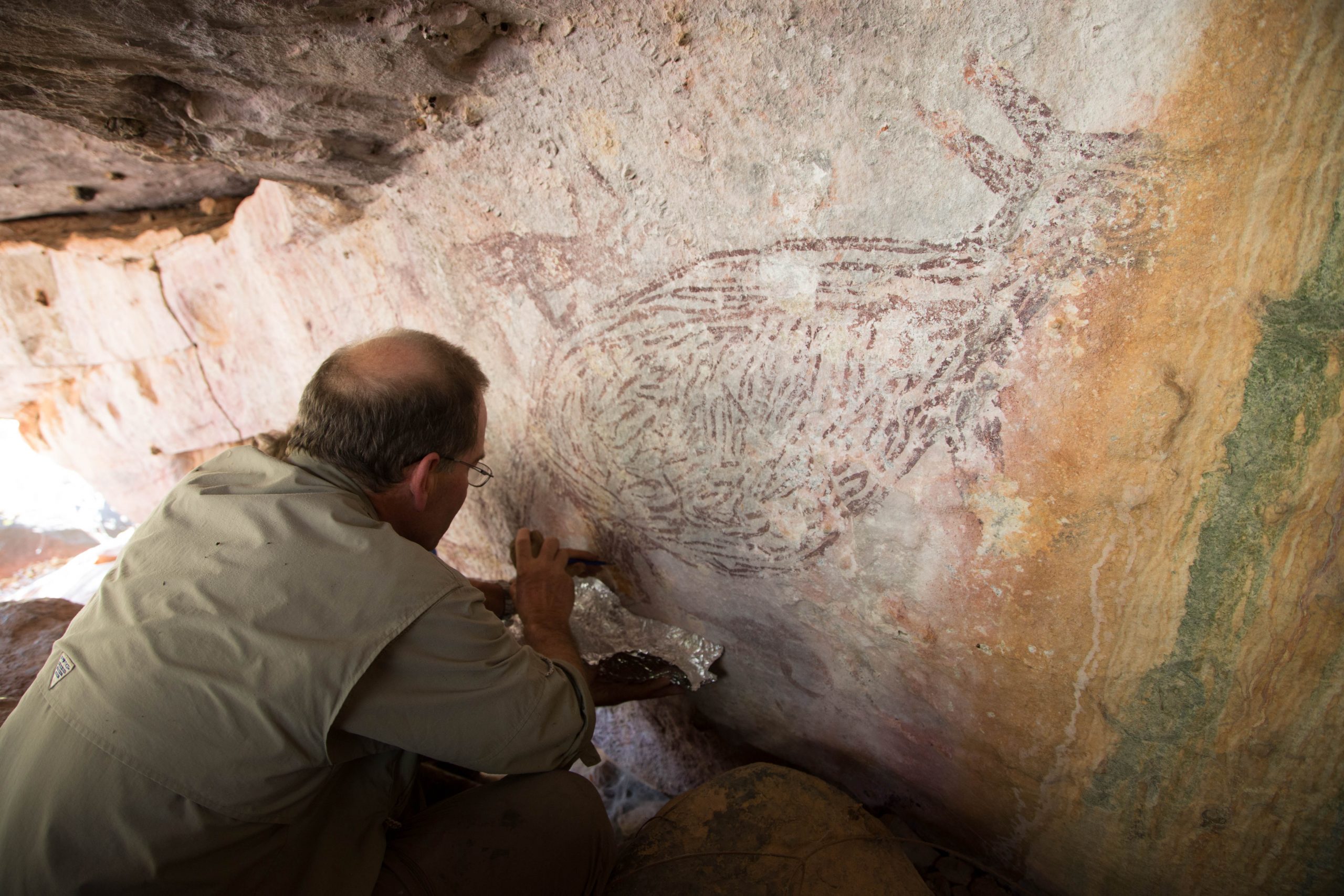 Traditional Owner Ian Waina inspecting a Naturalistic painting of a kangaroo. The inset is an illustration of the painting above it. Photo: Peter Veth and the Balanggarra Aboriginal Corporation, Illustration: Pauline Heaney

The oldest known Australian Aboriginal figurative rock paintings also commonly depict naturalistic animals but, until now, there was no quantitative scientific evidence to say just how old these paintings are. 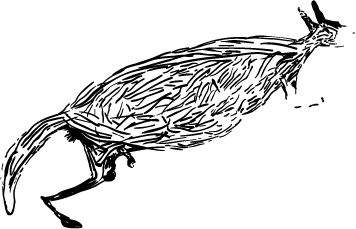 Future research will undoubtedly locate older paintings but this 17,300-year-old painting of a kangaroo in the Kimberley is the oldest know intact painting in Australia.

Published today in Nature Human Behaviour, Dr Finch and his colleagues detail how rock shelters have preserved the Kimberley galleries of rock paintings, many of them painted over by younger artists, for millennia – and how they managed to date the kangaroo rock painting.

Australia’s oldest art is a 17,300-year-old painting of a kangaroo

This 17,500-year-old kangaroo in the Kimberley is Australia’s oldest Aboriginal rock painting

Roo-minating about our oldest rock art

Life-size drawing of a KANGAROO dating back 17,500 years is found in Australia and could be the continent’s oldest rock painting