The below text and images are taken and adapted from Grahame L. Walsh’s 2000 publication, Bradshaw Art of the Kimberley.

Superimposition has been the most important single tool throughout the long quest to  establish a basic sequence for Kimberley rock art.

From a scientific viewpoint, the establishment of a basic sequence is a primary objective, as it provides a platform from which ongoing stylistic and technological studies can be structured. Its secondary role is to increase the value which the graphic records of the rock art might have for archaeological, palaeobotanical and pelaeo-environmental studies. There seem to be three primary ‘intent and purpose’ classifications in which examples of superimposition can be placed:
Casual — unintentional, Deliberate — positive, or Deliberate — negative.

An example of this form of cultural superimposition is visible in ‘A’, which shows detail of a figure in which specific areas of the body and arms have been selectively targeted. The shattered rock surfaces exposed by pounding still remain high contrast in appearance, with the lack of repatination suggesting that the action was relatively recent. Figure ‘B’ shows the determination with which the concentrated pecking and pounded has been applied, creating pecked concavities in the very hard rock surface. Attention has been focused particularly on the feet, then the head, but also on the ‘arm tips’. This assists in identifying a timeframe, as the arm pounding has taken place after the white forearms have been lost, and the defacers have believed the original ‘elbow’ area to have been the weapon-holding section of the arm.

In the body of Kimberley ancient art deliberate intent of image placement and  alignment is very extensive.

A recurring feature found among the numerous incidents of deliberate Kimberley ancient art superimposition is the alignment of the two figures concerned. Ensuring that the original image remains clearly identifiable appears to have been a priority, and the succeeding motifs have been carefully positioned and aligned to achieve this.

The remains of several earlier IIA Period motifs (A) can still be identified beneath the overlying complexity of well-preserved Bradshaw period art (B). The common practice of deliberately positioning a figure over the top of a prominent figure from an earlier cultural group has been applied in this instance. However, the different alignments of the two figures has permitted sufficient remnants of the earlier figure to be clearly seen to either side of its superimposed and dominating Sash Bradshaw.

In ‘A’, plan view legs of the IIA Period figure are shown when separated from the superimposition, permitting the finely drafted work to confirm its origins have been at the hand of an accomplished artist. Other detail of the earlier figure can be seen protruding from its now concealed position beneath the carefully aligned (C), outstretched arm of the Sash Bradshaw. Remains of earlier Tassel Bradshaws can also be identified beneath the prominent Sash Bradshaw pair.

Confirmation of Bradshaws postdating the ‘classic’ large adult hand stencils of the IIA Period is to be found in numerous instances, such as ‘D’ and ‘E’. Many superimpositions do prove unsuitable for positive confirmation, due to weathering having altered the clarity of the red paints associated with the two different figures. 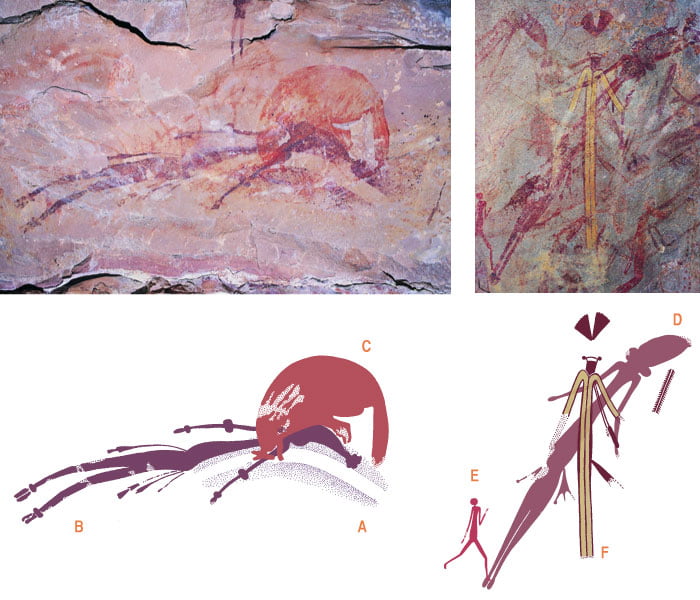 The determination of different groups of Erudite Epoch artists to ‘dominate’ or ‘obscure’ the artistic evidence of earlier cultures is evident in multiple deliberate superimposition sequences. This is not to be confused with variations of retouch and modification, which is a practice more commonly occurring in later art periods. The process under discussion involves the artists implementing a careful ‘replacement’ or ‘obscuring’ process, attained by carefully creating the figure so that it superimposes an earlier figure of a similar form.

This 460x1070mm superimposition example, surrounded by a large expanse of highly suitable but unused art surfaces, strongly supports the case for premeditated intent and careful positioning of images practised by early artists. The first motif is a well-stencilled Crescentic Boomerang from the Irregular Infill Animal Period (A). An artist of the Bradshaw Period has created a Tassel Bradshaw in the unusual, and in this case unnecessary, horizontal alignment, positioning it along and over the earlier motif (B). A later artist of the Elegant Action Figure Group has attempted to ‘obliterate by domination’ the key head and headdress area of the Bradshaw by the deliberate positioning of his left-facing macropod painting, and additionally by using the unusual bent-over alignment to maximise the area covered by his artwork (C).

Another example shows the earliest is the monochrome brown Acorn Bradshaw (D), which has the foot of a striding Elegant Action Figure (E) crossing its ankles at the lower left of the frame. A remarkably well preserved 570x280mm Tapering Outline variation of the Clothes Peg Figure (F) has then been depicted diagonally crossing the Bradshaw’s chest, creating a deliberate graphic ‘statement’ of cultural dominance or replacement.

The above text and images are taken and adapted from Grahame L. Walsh’s 2000 publication, Bradshaw Art of the Kimberley.